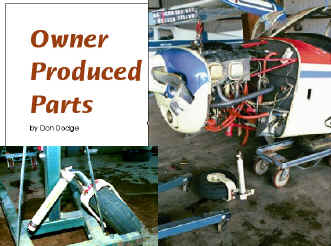 by Don Dodge
The article was written to address the producing of parts by owner and operators. The article is not intended to imply that maintenance technicians or repair stations may not be able to manufacture parts in the course of accomplishing repairs or alterations. That in itself is another topic for another day.

The sun was setting on another hot August afternoon when the South Carolina Flight Standards District Office received the call from a local airport manager notifying the office that a Piper Cherokee had suffered a nose gear collapse during taxi operations. It was reported that the Cherokee suffered minor damage; the damage included a prop strike and lower cowling abrasion.

Early the next morning, the inspector assigned to investigate the incident picked up the preliminary information with one hand and his first cup of coffee with the other. As the aroma and warm flavor of his coffee cleared the night’s cobwebs from his mind, he eyeballed the incident information. As he read, he thought: "Let’s see, Cherokee 140, taxi, nose gear collapse, prop, cowling, etc., etc.—wait a minute, Cherokee 140? How can a 140’s nose gear collapse during taxi operations and cause this kind of damage? An Arrow, maybe, but a 140?"

Years of experience told the inspector there was a lot more to this story than had been reported. So on that hot, humid, August morning, he headed for the airport. His investigation uncovered a classic case of an aircraft owner making parts and doing everything wrong. The issues surrounding manufacturing approved parts, who can produce these parts, what makes a part approved or unapproved, all came up in the investigation.

Time and again aircraft owners and maintenance technicians are pressured into making parts. Why do we do it? Why do we take on that liability? Let’s look at the facts.

The average general aviation, piston single-engine aircraft is more than 32 years old; the average piston twin is more than 27 years old; and the average turbo prop is 19 years old. The GA aircraft fleet was never designed to last this long, and, when it comes to getting replacement parts to maintain these aircraft, here are a few of the problems we all face.

The aircraft has been out of production for years.

ways for it to be considered an Owner Produced Part.

1. The owner provides the manufacturer of the part with the design or performance data.

2. The owner provides the manufacturer of the part with the materials.

3. The owner provides the manufacturer with fabrication processes or assembly methods.

4. The owner provides the manufacturer of the part with quality control procedures.

5. The owner personally supervises the manufacture of the new part.

As anyone can see, the discriminators for determining owner participation in a new part’s manufacture are very specific in the interpretation. Attachment (A) to the 1993 Memorandum clearly stipulates that the FAA would not construe the ordering of a part as participating in controlling the design, manufacture, or quality of a part. The key point is that the aircraft owner must participate in the part’s manufacture.

Question: If the part is owner produced, is it also a FAA approved part? Can I install it in the owner’s aircraft?

Answer: If the Owner Produced Part has all the characteristics of an approved part, is only installed on the owner’s aircraft, and is not for sale, it would be considered a FAA approved part.

A maintenance technician can repair a part, but sometimes the distinction between repairing a part and producing a brand new part is hard to determine. The circumstances surrounding the repair, the part’s complexity, availability of manufacturer’s data, and industry practices all are determining factors. For a lack of a better term I call making this determination the "Test of Reasonableness."

Example Scenario: An aircraft wing is damaged. The damaged parts include a wing rib, a 24-inch stringer, and wing skin. The aircraft Structural Repair Manual provides material specifications for the skin and stringer. A new wing rib is purchased from the aircraft manufacturer and the technician fabricates a stringer and wing skin using the damaged parts as a template. The technician installs these parts and repairs the wing in accordance with the manufacturer’s instructions.

Is this a repair or did the technician produce a new part? The stringer and wing skin do have a part number in the parts catalog for that aircraft, so let’s consider the following facts:

Maintenance technicians must face a cold hard fact. Aircraft owners can make parts, but they cannot install them. Installing Owner Produced Parts is a maintenance function and only technicians can do that. That makes technicians the "gatekeepers" for parts and guardians against the introduction of substandard and unapproved parts into the fleet. Under this rule the responsibility is the technician’s to determine airworthiness before returning the product to service. There is no one else to shift the burden of blame to. The technician’s name is on the blame line.

Owner Produced Parts can be summarized as follows: